HH The Amir Participates in Jeddah Security and Development Summit 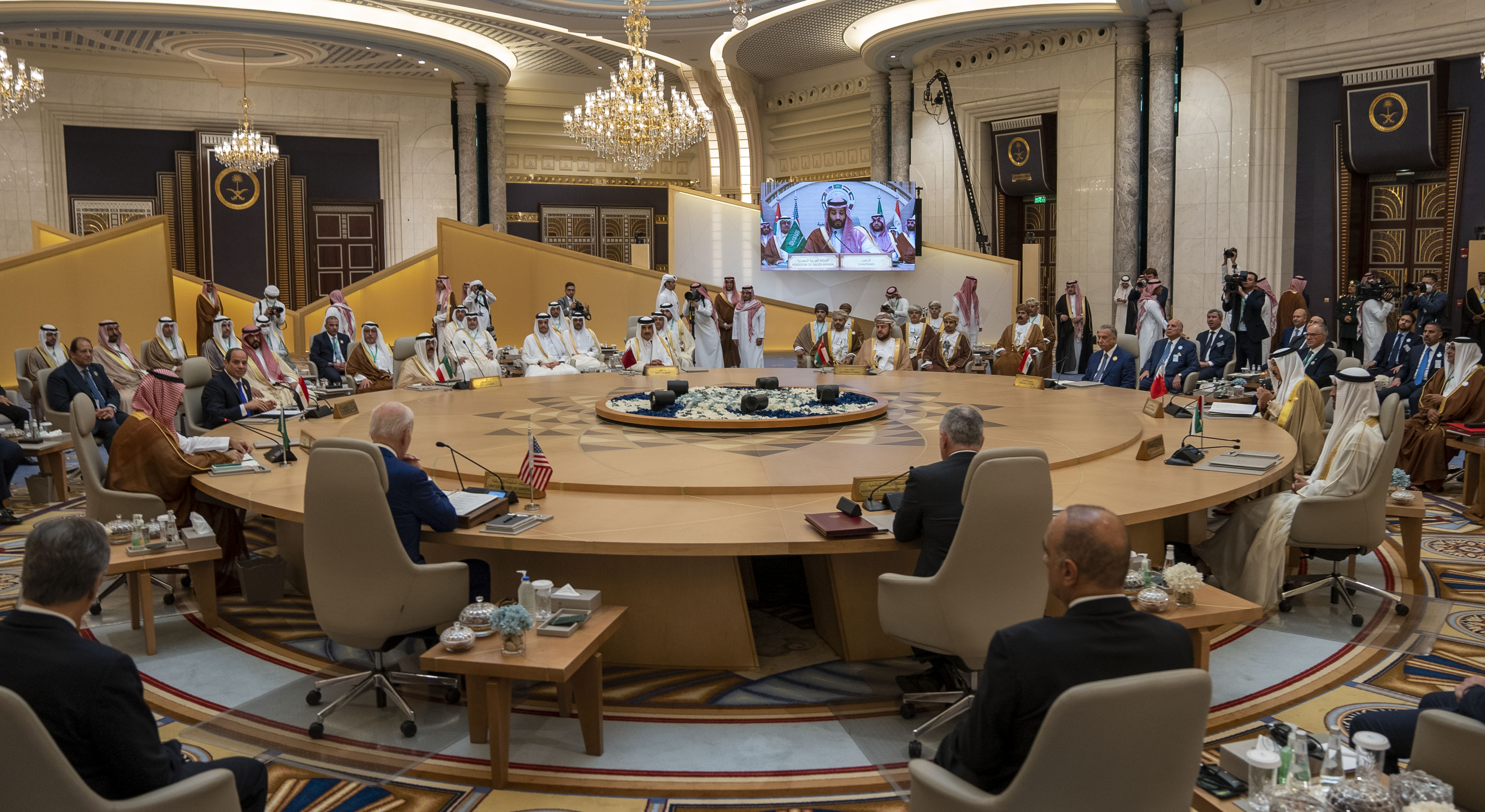 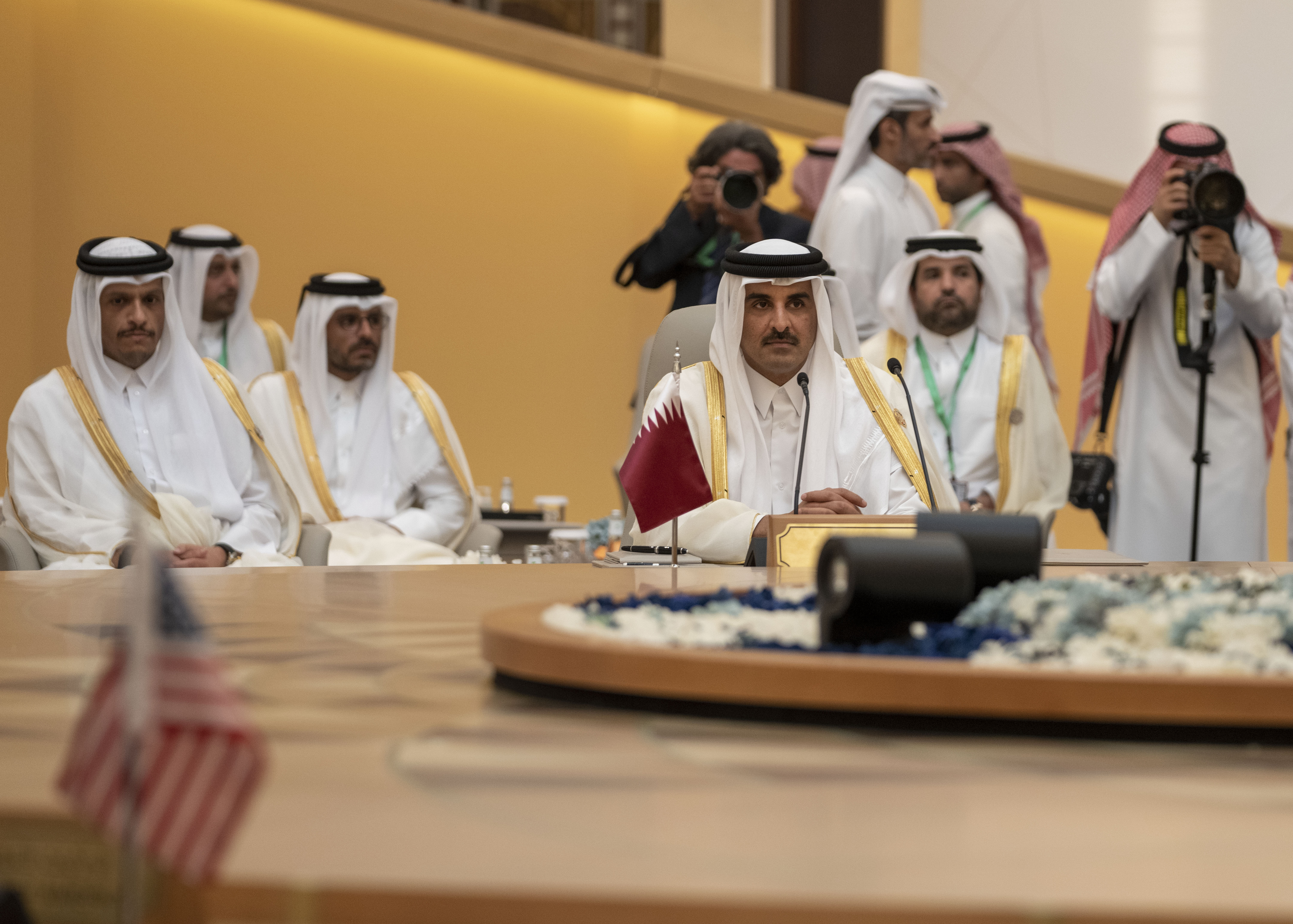 His Highness The Amir Sheikh Tamim bin Hamad Al Thani participated today, along with his brothers Their Majesties, Excellencies, and Highnesses leaders of GCC member states, HM King Abdullah II bin Hussein of the Hashemite Kingdom of Jordan, HE President of the Arab Republic of Egypt Abdel Fattah El Sisi, HE President of the United States of America Joe Biden, and HE Prime Minister of the Republic of Iraq Mustafa Al Kadhimi, in the Jeddah Security and Development Summit, which was held today at King Abdulaziz International Conference Center in Jeddah.

At the outset, I am pleased to extend my sincere thanks and appreciation to the Custodian of the Two Holy Mosques, King Salman bin Abdulaziz Al Saud and the Crown Prince for hosting this important summit and for the cordial reception and organization to make this summit a success.

This important meeting takes place against the backdrop of the challenges facing the world and putting at stake the capabilities of the international community to enhance cooperation among states, to find just and realistic solutions to global issues that cherish the values and norms residing in the conscience of humanity.

Everyone realizes that there is no security or stability, neither development amid conflicts. Invoking the provisions of international law and the Charter of the United Nations by the parties to the conflicts saves their peoples and humanity as a whole many victims and tragedies.

But as it is well known, international law is a customary law that obliges only those who are motivated by their own principles or limited capabilities to abide by it. Since the end of the Cold War, countries have been arguing about the need for alliances of international forces committed to international law and the Charter of the United Nations, and able to impose their stature of the law and the charter, in a non-selective manner, so that they will not be subjected to the interests of specific countries or their respective ideological orientations. The international community has not yet succeeded in this respect.

We are all aware that crises and wars in any region affect the entire world. The war in Ukraine has direct and indirect victims. This war has contributed to exacerbating an economic crisis that may lead to humanitarian disasters, especially in the case of food and crude oil importing developing countries.

In this context, along with its solidarity with the victims, and support for the political efforts to end this war, the State of Qatar will spare no effort in working with its partners in the region and the world to ensure a continuous flow of energy supplies.

We stress the importance of Gulf relations, and that of the Arabs, in general, with the United States and the need to maintain and strengthen them. It is no secret to anyone the pivotal role of the United States of America in the Middle East and the world.

Achieving stability in the Gulf region is essential not only to it, but to the entire international community. We reaffirm here our firm position to spare the Gulf region, and the Middle East in general, the dangers of nuclear armament, while recognizing the right of the countries in the region to use nuclear energy for peaceful purposes in accordance with international rules. We also stress the need to resolve differences in our region through dialogue based on respect for the sovereignty of states, non-interference in their internal affairs, promoting the common interests, and participating in shouldering responsibilities.

The dangers looming over the Middle East region in light of the tense international situation require finding a just and lasting solution to the Palestinian cause, which occupies a central position among the peoples of our Arab and Islamic worlds and the forces of peace worldwide, because it is a just cause with a heavy symbolic weight at the same time. The most important source of tension and instability will linger unless Israel stop its practices and violations of international law reflected in building settlements, changing Jerusalem’s character and continuing to impose siege on Gaza. It is no longer possible to understand the continuation of the occupation because of the selective policies in enforcing the decisions of international legitimacy, and opting for the politics of force and the imposition of a fait accompli over the principles of justice and fairness.

The Arab countries, despite their differences, have unanimously agreed on an Arab peace initiative that expresses readiness by them all to normalize relations with Israel if it agrees to a settlement based on international legitimacy resolutions stipulating withdrawal to the 1967 borders within  the peace accord. It would be improper for us to abandon our initiatives just because Israel rejects them. It is inappropriate for the Arabs to propose settlements, while Israel’s role is confined to rejecting them and increasing its intransigence whenever the Arabs make concessions. Just as Israel has a public opinion, we also have a public opinion in the Arab world.

We look forward to an effective role for the United States in calling for serious negotiations to settle the Palestinian issue, in accordance with international legitimacy resolutions and the principle of the two-state solution agreed upon by the international community, so that what is sought is not a negotiation for the sake of negotiations, nor to delude ourselves that there is a peace process underway.

We value the truce between the Yemeni parties, and the Kingdom of Saudi Arabia initiative for putting it forward, and we look forward to its continuation until a solution to this crisis is reached in accordance with the Gulf initiative and its executive mechanisms, the outcomes of the Yemeni national dialogue and relevant Security Council resolutions.

In general, we must agree on rules that we all respect to guide our action to resolve crises in Yemen, Libya and other countries. These rules include confining the tools of violence in the hands of the state, and distinguishing between the consensual system and the quota system. The quota system may go beyond partnership in political representation to sharing the state and its institutions as if they were spoils, in a way that would cripple and render them unable to carry out their functions. These principles also serve as a steering guide in Iraq and Lebanon, which are experiencing crises of another kind.

As for Syria, it is not plausible to accept the fait accompli, which means the continuation of the terrible injustice to which the Syrian people are subjected. We must all act to reach a political solution in accordance with the Geneva 1communique resolutions in order to achieve the aspirations of the Syrian people.

Beyond our regional responsibilities, we are not oblivious of the responsibility to participate in addressing the challenges facing all of humanity, including the issue of climate change. We hope that the upcoming COP 27 United Nations climate change conference in the Arab Republic of Egypt will fulfill the expectations of the international community in this regard.

I pray to God Almighty to culminate the deliberations of this summit in success.

May Allah’s peace, mercy and blessings be upon you.