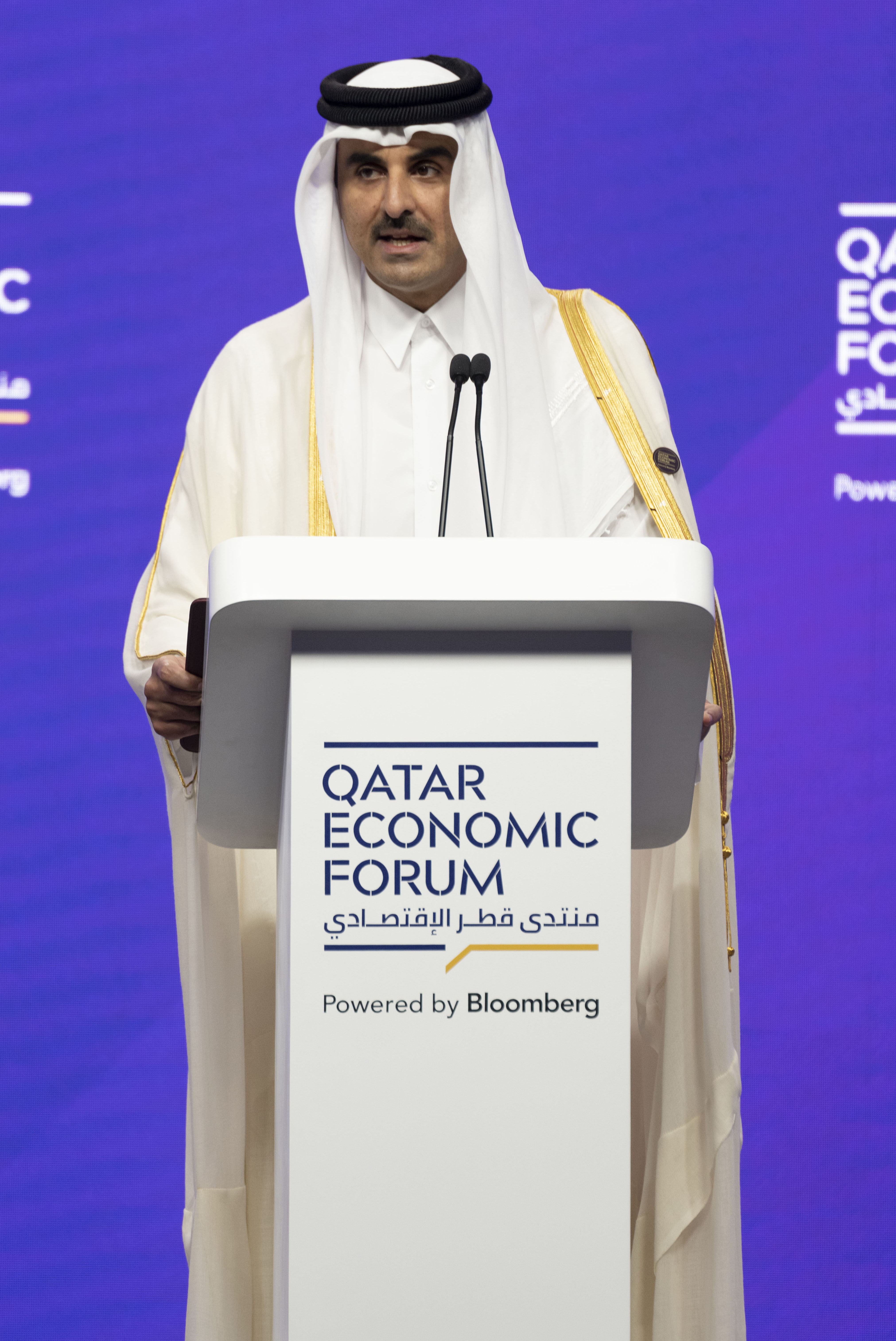 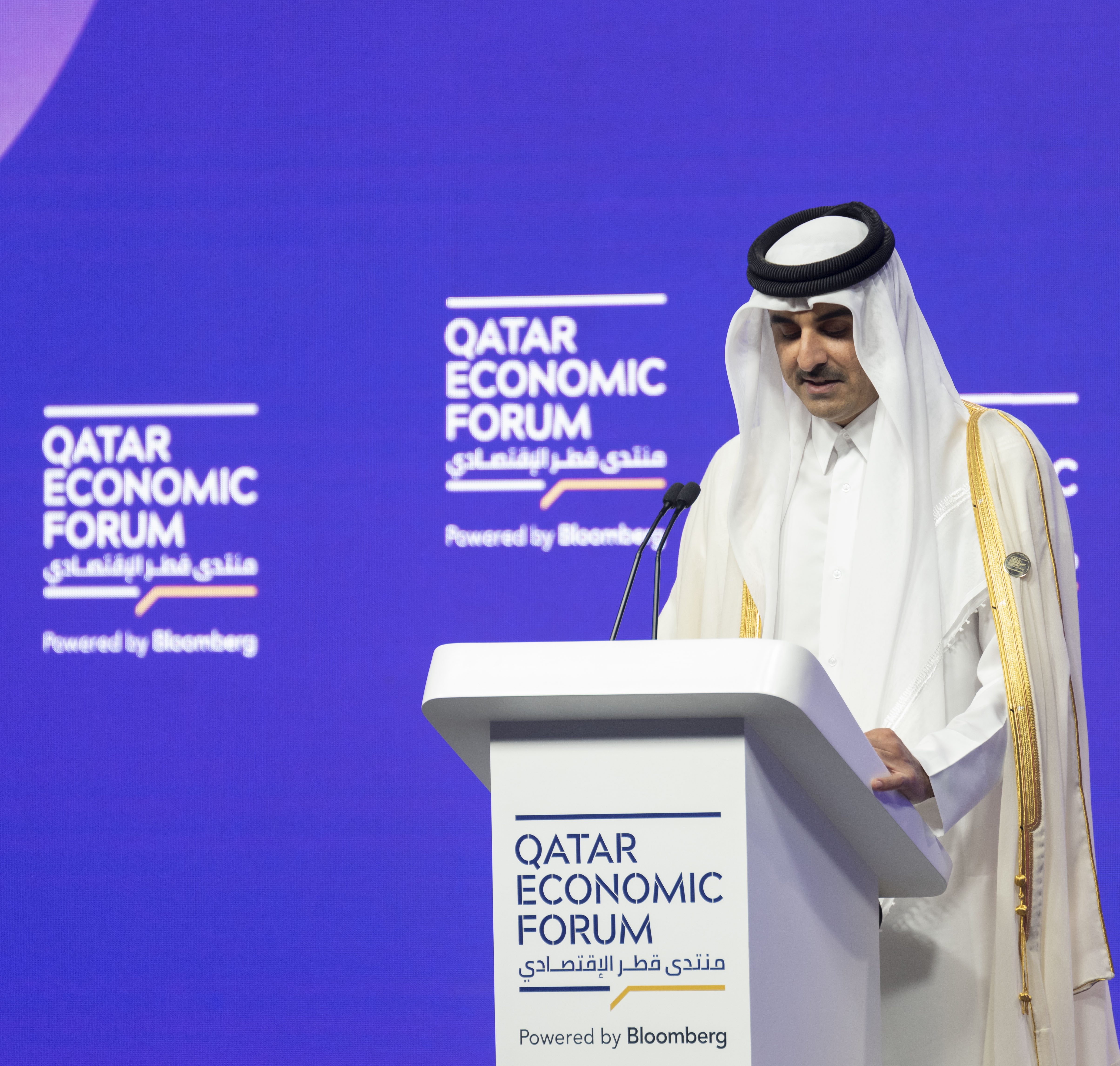 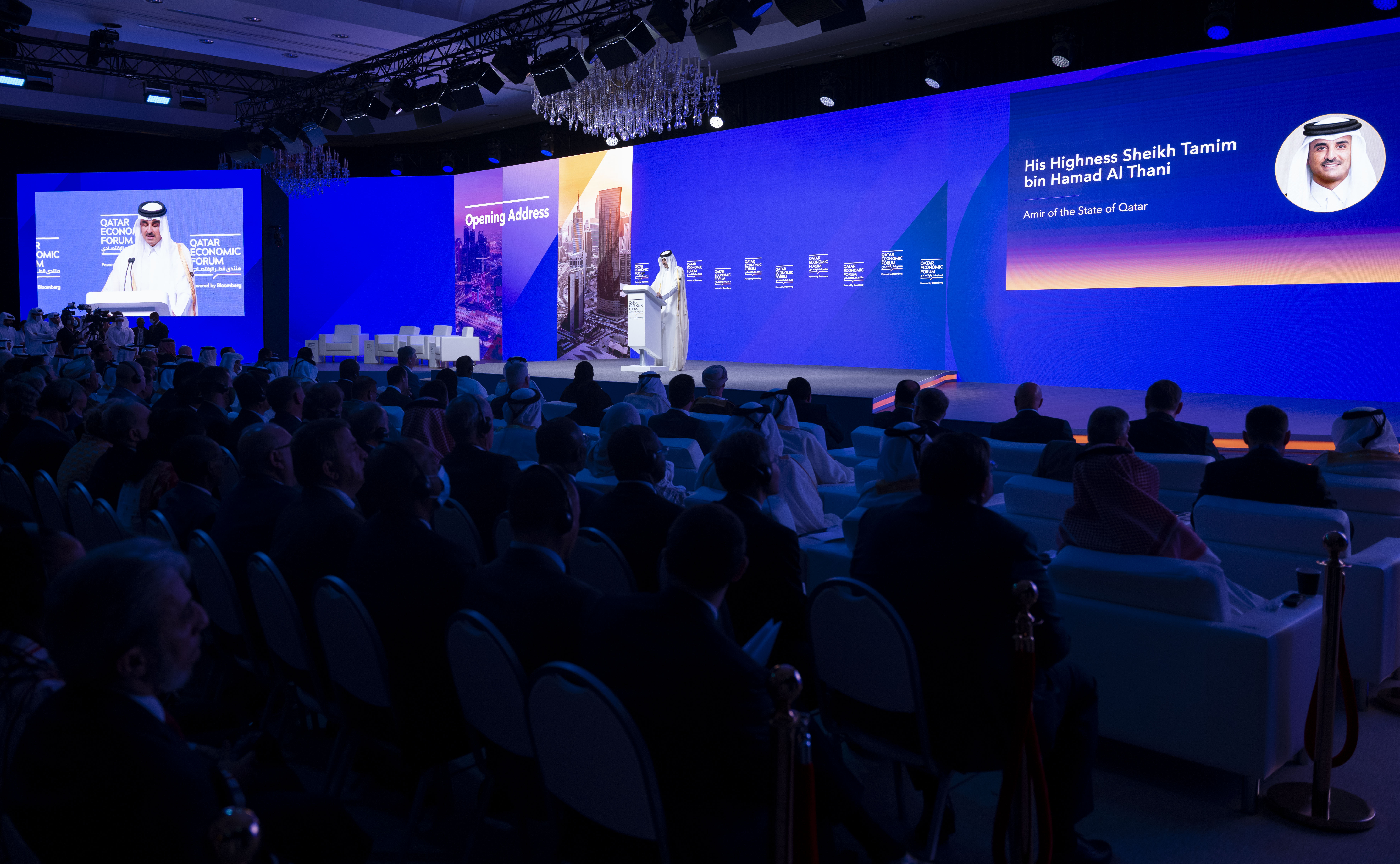 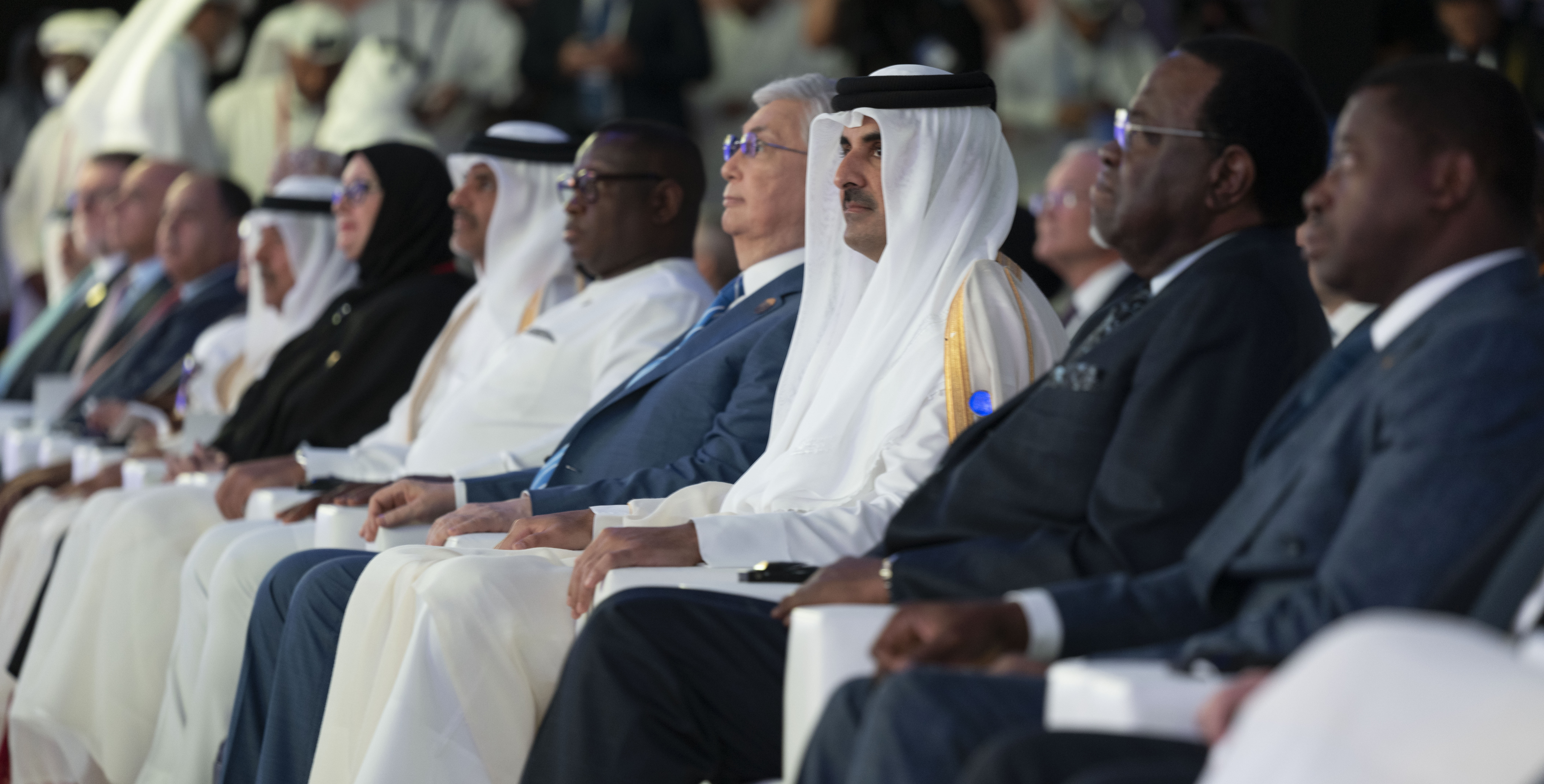 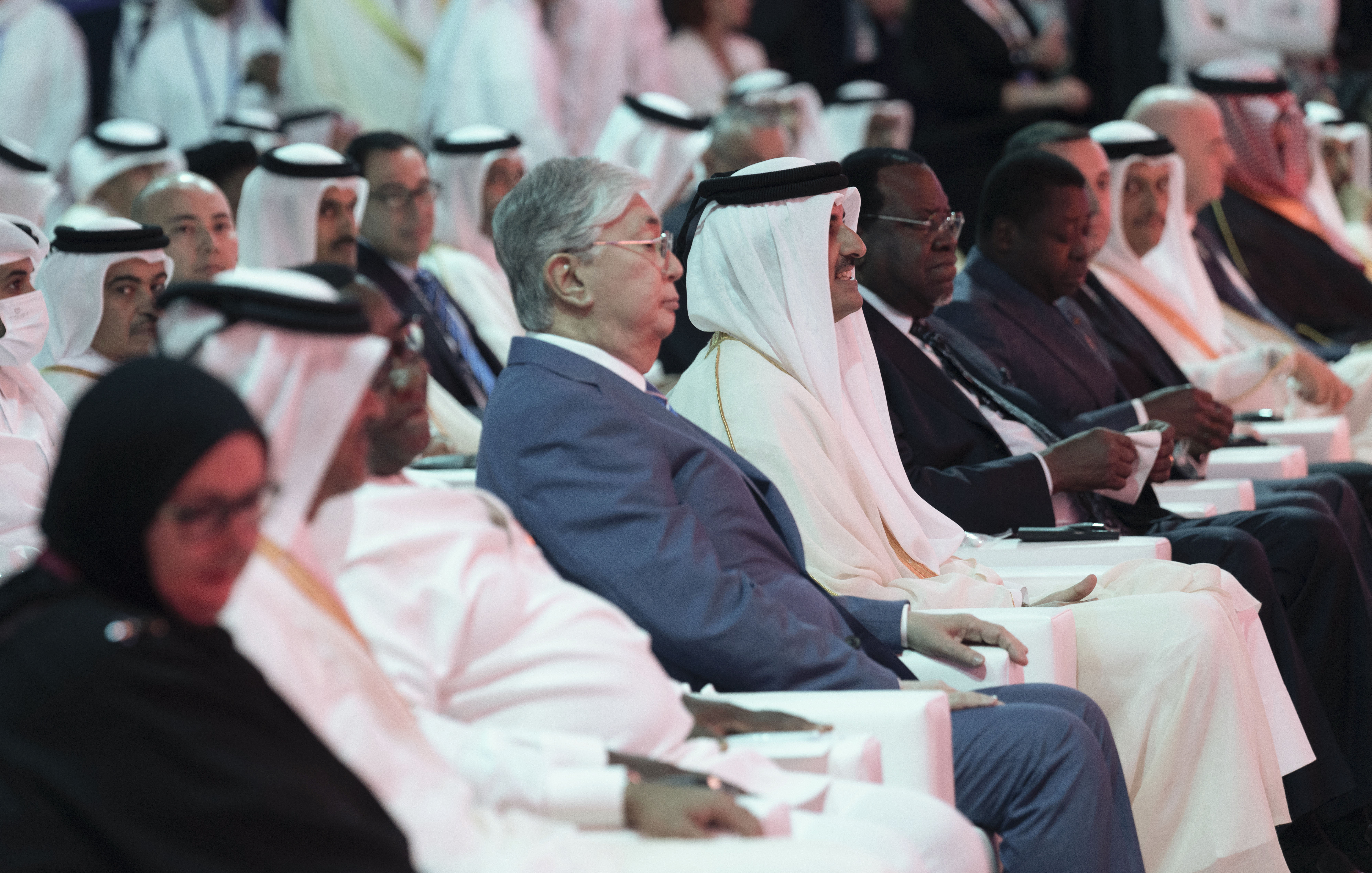 His Highness The  Amir Sheikh Tamim bin Hamad Al Thani patronized the opening of the Qatar Economic Forum 2022, Powered by Bloomberg, under the slogan "Equalizing Global Recovery" at the Ritz-Carlton Hotel, Doha, on Tuesday morning.

The opening was also attended by HE Prime Minister and Minister of Interior Sheikh Khalid bin Khalifa bin Abdulaziz Al-Thani, a number of Their Excellencies Sheikhs, ministers, heads of diplomatic missions accredited to the State, senior policy makers, parliamentarians, thinkers, economists, businessmen, media and representatives of regional and international organizations.

HH The Amir delivered a speech, here is its transcript:

In the Name of God, the Most Gracious, the Most Merciful

At the outset, I am pleased to welcome you all to the Second Qatar Economic Forum which aims at enriching dialogue on the strategic issues that are at the forefront of priorities for the global economy, and in this context, I value the wide participation in–person attendance, hoping that this will be a true representation of turning the COVID-19 page.

The positive health indicators have risen after lifting restrictions, recovery of trade flow, increase in public spending and rise in global demand at all levels. However, the confusion that has impacted the supply chains is still among major factors that drive up prices, in addition to the devastating effects of the ongoing war in the European continent on Ukrainian territory.

The pandemic has revealed the extent of the gap between the rich and poor nations, and contributed to its expansion, especially during the faltering efforts to achieve development and reduce poverty.

The international community must adopt an approach that could translate words and goodwill into practical steps that could achieve equality in economic recovery among countries and salvage the sustainable development goals in a way that could support the poor peoples and those suffering from turmoil and wars.

Economic forecasts indicate a slowdown of growth in the global economy by about a third this year compared to last year in the light of the high rates of inflation in the long term. This could be a prelude to an inflationary recession the world has never seen like it since the period between 1976 and 1979 according to the world bank reports, when sharp rises in the interest rates to combat inflation led to the economic recession of the early 1980s.

Among the impacts of the Ukrainian crisis are the rise in energy and grain prices and the effects of that on the global economy.

There are immediate humanitarian repercussions emanating from the interaction of the effects of war in Ukraine and local crises, such as in Ethiopia, Yemen and Syria, in a way that may immediately result in exposing hundreds of thousands of people to the risk of starvation.

There are issues that have no economic solution, these include the war and its devastating consequences on Ukraine and many other countries and peoples. The solution, in this case, can only be politically oriented. Given the circumstances of war, the food crisis should neither be left to the law of supply and demand nor should the issue of extreme poverty be left to the poor countries to face alone.

Our success in overcoming these challenges remains dependent on the ability of all our countries to adhere to a set of principles, foremost among which is the consolidation of justice, equality and solidarity and rejection of double standards.

Qatar’s gross domestic product (GDP) growth outlook in 2022 is forecasted to be 4.9%.  This is due to the rise in energy prices and the positive impact of the policies and procedures adopted by the State with the aim of supporting the economic sectors, enhancing the private sector’s production capacity, and adapting to regional and global variables.

We are aware that the rise in energy prices is short-lived and can’t be maintained forever. We had passed through long periods of low energy prices, and the only compensation we got against this decline came from the rational policies and savings during the periods of high prices, for the purpose of investment and diversification of sources of income.

In the field of economic diversification, some legislative amendments were introduced to facilitate commercial transactions, enhance competition, protect the consumer, encourage the industrial and technological sector, support the national products’ competitiveness and increase the foreign direct investment by allowing 100 % foreign investors ownership of companies.

These efforts have led to a significant increase in the volume of domestic and foreign investment over the last years, especially with regard to foreign direct investment, which increased by 27 percent during 2021, compared to 2020. We hope this growth will continue to rise in the coming years in accordance with the adopted plans.

Supporting the economy, investment and innovation in parallel with consolidating shared human values and peacekeeping is the way to build the necessary capacities in order to transcend crises and overcome challenges facing humanity as a whole, such as the threat of epidemics and climate change, which is one of the most serious challenges that we face in our time.

Qatar assumes its responsibility as an active partner in the international community to confront climate change in its various economic, environmental and social dimensions.

Qatar has been one of the pioneering and leading countries at the global level to establish the "Net-Zero Producers Forum," which is an international initiative aimed at cementing the principles upon which the Paris Agreement on Climate Change was concluded, especially in the field of developing practical strategies to reduce carbon emissions to net zero emissions, promoting a circular economy approach, and developing energy technologies.

Qatar and the entire region are heading for a significant historical event of hosting the 2022 FIFA World Cup for the first time in our region. We are confident that the wide participation of the countries of the world in this event will not only open the prospects for strengthening international economic partnerships but will also constitute a springboard for strengthening the bridges of communication and dialogue between different peoples.

I welcome you all to Doha.