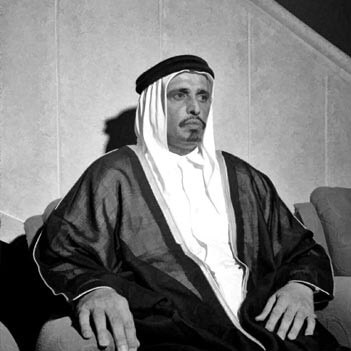 The Fifth Ruler of Qatar and the first Ruler to bear the title "Amir". He was noted for his solemnity, wisdom and careful discretion in tackling issues. He followed a path of conciliation and consolidation of common word, during his reign the Shura (advisory) Council was formed and the first  interim basic law was promulgated.

Sheikh Ahmad Bin Ali Al Thani was born around 1920 in Doha. He became the Ruler of Qatar on October 24, 1960 upon the abdication of his father.

By November of the same year the Ministry of Finance was created , along with the Financial and Administrative Department that was tasked with managing the financial and administrative affairs of the government. In 1967, the Department of Civil Service was established.

His reign was characterized  by the rapid economic growth as a result of the discovery of a large number of oil fields in Qatar, such as: the Idd al-Sharqi field (1960) – which was the first offshore field to be fully operated with facilities and fit outs–  and Maydan Mahzam field (1963). This was accompanied by the enactment of laws establishing the Department of Oil Affairs, Department of Legal Affairs, and Department of Labor and Social Affairs.

In 1965, an oil storage facility was set up in Halul Island north of the country and in the same year exploration operations commenced in the Abu Al haneen field. Thus Qatar had transformed from a regional economy based on pearl diving and traditional regional trade into a contributory in the world economy through oil production.

In January 1968, the British Government pulled out its troops from the East of the Suez, terminating protection treaties with the Arabian Gulf rulers, including the 1916 Treaty with Qatar.

On April 2, 1970 the interim Basic law for Qatar was promulgated and the Council of Ministers was convened on May 28 of the same year under the chairmanship of Sheikh Khalifa bin Hamad, the Heir Apparent and Deputy Amir .

On September 3, 1971 Qatar’s independence was declared, abrogating the Anglo-Qatari Treaty of 1916. Thereupon, the people of Qatar owed their allegiance to him as the Amir of the State of Qatar.

Sheikh Ahmad passed away on November 25, 1977 in London. His body was transferred to Doha and was buried in Al-Rayyan cemetery.